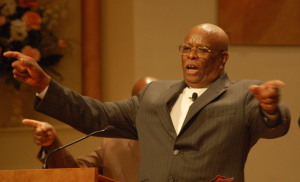 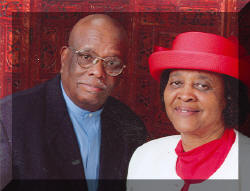 In 1956 Oprie Jeffries, a young man tired of living a  life of    sin, began looking for a preacher who was willing to teach him and his wife the truth about God’s plan for salvation.   They joined a church where he thought they could get everything they needed to meet God in peace. During this time,  Oprie Jeffries was made a minister. After being in this church awhile, the young minister found this preacher to be “one of the guys hanging out on the corner”. So, he and his wife, Mozelle, left this church. With a determined mind to serve God, especially now with his first child on the way, he continued to search for a preacher that stood with the word of God. It was his mother-in -law who told him about a preacher on the radio named Elder W. F. Lucas. She said he was preaching repentance and the baptism in the name of Jesus Christ. Minister Jeffries began listening to Elder Lucas. He remembers Elder Lucas’ challenge to any listener who could condemn what he was preaching. One minister called him on his challenge. The subject was paying tithes. That minister tried to prove his point, but was unable to compete with Elder Lucas and his knowledge of the bible. This caused Elder Lucas to shine as a true teacher of the true gospel of Christ.

After hearing Elder Lucas, Minister Jeffries said to himself, “this man has convinced me that he has the gospel of Jesus Christ, and I have found someone that I believe can help me and my family save our souls”. The young minister decided to join St. James True Church of God in Christ Inc., under the leadership of Elder Clark. Here he would be able to line up with this movement, now that his second child was on the way. Two years pass and the church body began going through a reformation. It was at this time that God showed Elder W. F. Lucas that women could not preach the gospel. From the bible Elder Lucas was given scripture, chapter and verse to back up his teaching. In 1958, unaware of Elder Clark’s intention to separate from the movement, Minister Jeffries was convinced to go to Conyers, GA with Elder Clark to build a new church. Thinking that this church would be one in the body, he willingly went. As time went on Minister Jeffries realized that the fellowshipping between the churches became less, and the recognition of Bishop Lucas as the overseer did too.It was not until 1960 that Minister Jeffries was reconnected to the True Church of God in Christ Inc. By now Bishop W. L Lucas and his son Elder W. F. Lucas were working together at Lucas Temple in Scottdale GA. While working beside Bishop Lucas and his son Elder Lucas, Minister Jeffries and his wife added three more children to their family.

By 1968 Bishop W. L. Lucas decided to send Minister Jeffries to St. James True Church of God in Christ as the pastor. He was also ordained an Elder at this time. In his first year as pastor, during the Sisters Convention, his youngest son took his first steps.In the years to come Elder W. F. Lucas became the Junior Bishop and released his position of General Superintendent to another Elder in the True Church. Sadly in 1972 Senior Bishop W. L. Lucas died, and the responsibilities of the church fell on Elder W. F. Lucas. He then became the Bishop and General Overseer. In 1991 the Elder, which held the position of General Superintendent, left the movement. For his faithfulness and his determination to share the gospel of Jesus Christ with the True Church organization, Bishop W. F. Lucas appointed Elder Oprie Jeffries to the position of General Superintendent. All six of his children grew up in the church and five of them are still in the church today. Elder Jeffries has four generations of his family with him in the True Church. Currently there are three generations of preachers in his family. 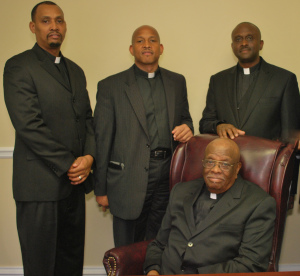 Elder Jeffries was named Bishop and General Overseer of the True Church of God, Inc. after the sudden passing ofthe late Bishop B. J. Lawson. Bishop Oprie Jeffries appointment was confirmed during the fifth Sunday meeting in December, 2006. At this time Bishop Jeffries announced that he would continue to teach and preach the true word of God as did the three Bishops before him. His teachings is strongly that we must live perfect.